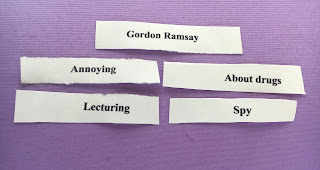 We (writers group in Rotterdam) had to create a story in 15 minutes using 5 words we chose them eyes closed. Here are my words↚ and the story. :)

“This is so annoying,” Gordon Ramsay said to his wife.
“What’s wrong honey?” she asked wrapping her hands around his neck and giving him a kiss.
Oxford University wants me to give a lecture about drugs. This is so fucking weird. It has my name on it though.” he said flipping the paper on the kitchen table.
“Don’t! It’s wet,” his wife cried. She took the letter, her eyes widened. “Oh, James Bond will be there too. We should go honey. So I will have something to post on my Facebook account and show off to my friends. Those bitches,” she said. A smile appeared in the corner of her plumb lips.
“Have you gone mad?” Gordon Ramsay yelled. “The only thing I know is to cook and have a fight with other cooks at Kitchen’s hell. I….”
“Oh, stop wimping all the time,” she interrupted him. Why don’t you set up a fight with James Bond, instead? All the newspapers will write about it. Besides, I think this is more sexy, than fighting in your stupid kitchen.”
He looked at her in disbelief and said. “Ok, fine, you make the rules, I follow. I curse the day I gave you the right to use my bank account and now we are now in deep shit. I don’t want to be like Jamie Oliver. So I guess I have to accept every single possibility to make money. Otherwise we will be like Jamie Oliver,” he sighed and looked at the letter once more. “Shit. Look what I have to do now: studying drugs.”
“Oh, you don’t have to study darling.”
“But how on earth am I going to give a lecture about drugs?” He threw his kitchen towel and put his hands in the air.
“Start using them,” she smiled. “It’s that simple. This way you will have the experience. Trust me hon, experience is all that matters and not those stupid and annoying lecturers. They don’t know what they are talking about.”
“Start using them,” she smiled. “Is that simple. This way you will have the experience. Trust me hon, experience if all that matters and not that stupid and annoying lectures. They know nothing what they are talking about.”

Ps. I don’t even know if he really has a wife. haha